“October” is not Cancer month, every fucking month is.

Hate this shit that shows up on my profile on Face Book no doubt because the C word comes up often and the assume I am interested and might give to a cancer charity. October 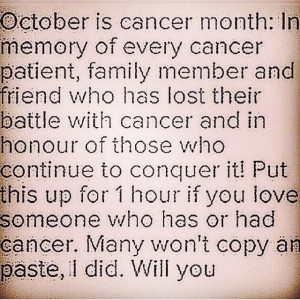 is not cancer month, if you have cancer its every fucking month. I cant even sit down and watch TV without some scrawny looking person asking me donate £2 a month to the richest “charity” in the country, so the share price of these Blue Chip companies continues to rise. Cancer shopuld no longer be seen as a disease its a masive industry and a lot of people are making serious bucks from our misfortune. Chief Executive of Cancer research UK is on around £200,000 a year

In 1970 the US president Nixon “declared war” on the disease when only in 10 people got it, now its 1 in four who get cancer despite all the money that has been given to the pharmaceutical industry the last 45 years, its got to be considered a failure and waste of resources. No its not! we are told, people are getting older. By the time you need treatment for cancer its invariably too late. When they talk “survival” they only mean 5 years, die one day after five years and you go into the statistics as a survivor. The public has to focus on the risk factors for cancer smoking, the air we breath, the food we eat and lack of exercise. When the happens cancer rates will fall, with the share price of Pharmaceutical companies