Me and Lance Armstrong 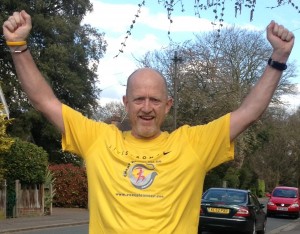 Perhaps now is the time to tell readers about my relationship with Lance and the role he played in getting me to run the Great Wall Marathon. When I was first diagnosed. A number of people suggested I read Lance Armstrong’s book “it’s not About the Bike” . In 1993  Lance Armstrong was diagnosed with stage 4 cancer and the book talks about his treatment and recovery and how he goes on to win the Tour de France.

The book starts with Armstrong going straight into the debilitating symptoms he experienced and how his “victory” against cancer was his “greatest triumph”,  greater than winning 7 Tour de France races. I stopped reading, “Superman” could not be my role model, how could I a normal human possibly hope to get over cancer when this was “his greatest victory”, I would find another way.

I wrote earlier in the blog, my biggest fear was I would never laugh again. Perhaps I was fortunate to have young children and on telling them I was ill and had to go into hospital I was asked if I was going to die. To which I responded “I hope not but we all die sometime”; to which my youngest daughter asked “if you die daddy can I have your lap top”, from that moment I knew life could be normal again and I had not lost my sense of humor.

You soon realise the world does not stop turning because you have been diagnosed with this awful disease, you just have to get on with it, shit happens!  You have a choice, do you want to live like an ill person or look at the treatment as an inconvenience to every day life. I am a very competitive person and one of the frustrating aspects of treatment particularly chemotherapy is how it leaves you physically drained and unable to do basic activity never mind competitive sport. You try to walk hundred meters and it’s like having bags of cement strapped to your legs. I wanted to exercise play tennis and golf but simply did not have the energy. I often thought about Lance Armstrong just completing the Tour de France post therapy and it seemed an extraordinary achievement. So while in France I gave the book another try and immediately recognized the place we had been to and he had come out the other end in one piece and so would I. We became kindred spirits.

I was amazed how my experience of cancer treatment was so similar to Armstrongs and how we’d coped with having the disease. The only thing that mattered to us was survival, that’s all I focused on for 12 months, my own survival. I was oblivious to the feelings of others, avoided making friends with other cancer patients because it might suck some of my energy which was reserved exclusively for myself and my kids. I was barely moved by the death of my father in October 2011 or the tragic death Janetts brother-in-law, the important thing was that, I was still alive

Later in the summer (August 2012) while I was on a trip to Copenhagen ( which I will go into on another posting) the allegations about Lance Armstrong taking performance enhancing drugs were being confirmed by his teammates. As I sat with friends in a bar this was the main topic of conversation. “No Way”! said I. I was 101% certain he was clean. Anyone who has been to the place Lance and I have been is just mentally stronger, was my rational.

Now these friends are people involved in elite sport and one  is friends with cyclists who have ridden on the tour . 99% of them took drugs he says , are you seriously saying they greatest cyclist ever was the only one that was clean? Yes says I, and fueled by a few beers, I said I would prove it. Hows that, they asked? One of the Guys Klaus Sletting had earlier shown us pictures of The Great Wall Marathon he had taken for The Sunday Times (The header of the Blog). I will do that marathon , I say slugging back another beer.  Bearing in mind Klaus and Ole had spend the previous few days driving me around Copenhagen because I could not walk very far, my offer caused a certain amount of amusement,  readers may find this cruel. However when you dish out the piss taking as I do, I have to be able to take it and close friends have never spared me, cancer or not, another thing which has helped enormously through this experience.

So when are you going to do this they say between laughs, “Next year “ say I, after necking the beer one more time. That’s only 8 months away says Klaus barely able to conceal his amusement, the others laughed some more. I slowly drank the rest of the beer to give me time to think. Not sure if it was the beer or Lance Armstrong that had me thinking that I could do anything but I was doing it in 8 months. The  “how” I would worry about when I had sobered up.

Armstrong’s confessions to Ophra Winfrey, was a real shock to me, but in another way, it showed him as  a mere mortal, like the rest of us. Watching him speak  to Ophra brought it all back, my determination to survive, the win at all costs that kept me focused and sustained me through the disease.

I recently read David Walsh’s brilliant book Seven Deadly Sins – My Pursuit of Lance Armstrong which provides the story how this determined Irish journalist knew what anybody with a limited knowledge of cycling should have known, Armstrong was doping.  Walsh pursed the story for many years despite all the grief he got and was awarded the honor of Journalist of the year for 2012, for the years of work he put into exposing Armstrong.

David Walsh raises the question that Armstrong used his cancer and the Livestrong Foundation that he started as a buffer, to protect him from the awkward question many wanted to ask? This may very well be true, but we are where we are and the Livestrong foundation is now the leading cancer organization in the world and worthy of support and why all the yellow on the website and why I wear their t shirts when I train.

David Walsh tells a funny story in his book, about how he and a colleague ordered pizza to their room at a very frustrating time during their pursuit of Armstrong. The delivery boy was wearing a yellow Livestrong wrist band and for a laugh they wanted to test how much he loved the band or a tip. The boy wanted  the tip, but it got me thinking about the yellow wrist band which has become an international symbol of surviving cancer. For me is also represents the determination of guys like David Walsh, or cancer survivors like David Servan Schreiber and Lance Armstrong, hopefully in four years time, I will describe myself as a survivor.  After finishing  Seven Deadly Sins, I bough a yellow wrist band and will wear it as long as I am cancer free and would encourage others, to advertise the fact there is quality  life after cancer diagnosis.

The suggestion is that people like me should feel betrayed because Armstrong seems to be  an unpleasant individual, who lied, cheated and bullied people to maintain the veneer he had cover himself with. My view is that the only people who should feel angry with Armstrong are “clean” cyclists who were beaten by him. I did not admire Armstrong because he was a good cyclist, I admired the way he dealt with his diagnosis and showed there was life after cancer, so I don’t feel betrayed at all.

Like Armstrong, I am prepared to do what ever it takes to keep cancer from infesting my body again. I suspect its this very same attitude that made Armstrong such a successful cyclist. There is a moment in Armstrongs own  book which perhaps sums up what i have got from him. He describes cycling up a steep hill and feeling really tired, he looks over at his main rival Jan Ulrik who is also very tired and  breathing hard. Armstrong  is wondering if he can keep this pace up for much longer. Suddenly it occurs to him that the tiredness he feels now, is nothing compares the tiredness he felt on days during chemotherapy and this is easy compared to those dark days. With that he left Ulrik in his trail and went on to win the stage.

There in Copenhagen I was  tiring after being on my feet for more than half hour, but I decided there would be more to my future than just being a cancer survivor .I wanted  to do something remarkable, something I could not have done before the diagnosis. Looking at Klaus’s pictures that night in Copenhagen, I had  found something,  not just any old marathon, one of the hardest marathons in the word, a marathon which goes across the great Wall of China up and down hills which  takes the elite people nearly 4 hours to complete.

When I’m running up the hill approaching the wall on May 18 I will be thinking of  two diametrically opposed determined individuals; David Walsh and Lance Armstrong who have provided so much to inspire  me. As I pass those who stop to have a rest, I will   thank Lance for motivating me to take on this challenge and David Walsh for never giving up, when it would have been to his advantage to do so. There is more to life than simply surviving, life is  about quality not just the quantity.

One Response to Me and Lance Armstrong