More smoke and mirrors from the cancer industry. You are going get Cancer, so give us your money and we will save you. 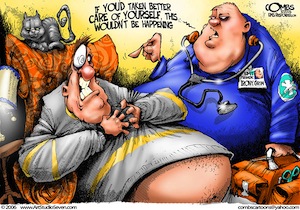 Cancer rates are increasing exponentially, according to todays papers  and TV I remember the idea of having cancer would scare the shit out of me, changing my life style would have been a small price to pay. I may have still got cancer, but at least I would not have regrets that I did not do more to prevent it when I had a genetic predisposition to after my mother suffered from Colon cancer..

The cancer industry are telling us that  more people are getting cancer because people are getting older, better diagnosis etc etc.  Personally I would have thought those factors would have been balanced by the increases in money and research being done in this area. The scientists tell us survival rates are increasing dramatically. Survival in cancer does not mean cure it means you will be alive five years from the date of diagnosis, you may be riddled with cancer and die the following day but statisticly the boffins consider you a survivor of cancer Lol.

In addition those patients who are now being diagnosed earlier because of scans etc, may have had the cancer for ten years in the 60s before it was discover and people died quickly back then because it was so advanced when discovered. The tell us Bobby More would have “Survived” if he had gone to his GP earlier not sure about that, they discovered mine very early, dont get me wrong, I have done very well from £200,000 worth of treatment, my qiestion is that money well spend for some extra time. It may have nothing to do with advances in medical science that some of these people are living longer, it may be because the diagnosis shocks you into changing your lifestyle as it did me.

Cancer research people were on the TV last night asking for more money for the “Fight” I hate that word I prever the Penny Brohn philosophy “Living well with cancer”. A seemingly side issue to the cancer debate is that 50% of these cancers are preventable. Politicians dont want to be accused of creating a “Nanny state”, despite the fact they are having difficulty funding the health service service as it is today, it nots sustainable if the scientists turn cancer into another chronic disease which can be managed with expensive drugs. Everybody has to die someday and natural selection means some are going to die earlier than others. Our focus should be on living as heathy a life as possible and when your time comes having the best palliative care available. The media “scary” media report on increasing cancer rates and the possibilities?? with new treatments! reminds me of the wonderful poem Joseph Malins wrote at the turn of the 19th century.”The Ambulance down in the Valley. 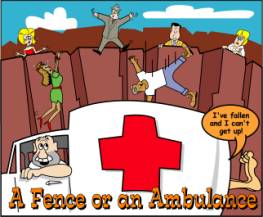 ‘Twas a dangerous cliff, as they freely confessed,
though to walk near its crest was so pleasant;
but over its terrible edge there had slipped
a duke and full many a peasant.

So the people said something would have to be done,
but their projects did not at all tally;
some said, ‘Put a fence ’round the edge of the cliff, ‘
some, ‘An ambulance down in the valley.’

But the cry for the ambulance carried the day,
for it spread through the neighboring city;
a fence may be useful or not, it is true,
but each heart became full of pity
for those who slipped over the dangerous cliff;

And the dwellers in highway and alley
gave pounds and gave pence, not to put up a fence,
but an ambulance down in the valley.

‘For the cliff is all right, if your careful, ‘ they said,
‘and if folks even slip and are dropping,
it isn’t the slipping that hurts them so much
as the shock down below when they’re stopping.’

So day after day, as these mishaps occurred,
quick forth would those rescuers sally
to pick up the victims who fell off the cliff,
with their ambulance down in the valley.

Then an old sage remarked: ‘It’s a marvel to me
that people give far more attention
to repairing results than to stopping the cause,
when they’d much better aim at prevention.

Let us stop at its source all this mischief, ‘ cried he,
‘come, neighbors and friends, let us rally;
if the cliff we will fence, we might almost dispense
with the ambulance down in the valley.’

Born 1957, have 4 children. Was diagnosed with stage three rectal cancer in March 2011.
View all posts by Richard Lanigan →
Bookmark the permalink.