Rx for Health: A Daily Dose of Exercise! 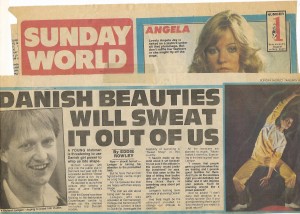 There is an increasing awareness in health care of the relationship between Exercise and wellbeing. Last year at a conference I met Dean Ornish who I later found out was Steve Jobs doctor. He did a study and found people who did 30 minutes cardiovascular  exercise every day were less likely to get many chronic illnesses like cancer or have the cancer return, in fact considering chemotherapy a=increased my chances by only 15%. From everything I have read, I can confidently say exercise and nutrition are  the most effective drugs on the market and the reason we dont know more about this. Is profits come before people in a capitalist market economy.

Where I went to boarding school in Ireland (Gormanston College) we had fantastic exercise facilities, a swimming pool, athletics track, 9 hole golf course, squash courts/handball alleys and about 15 football pitches every day you were doing exercise. Our football team was the best in Ireland and in Senior we trained every day like professionals would except we trained after class. My problem was I loved the competitiveness of sport and the banter with team mates and exercise for exercise sake tended to bore me.

Nevertheless In 1983 having moved to Denmark as Jane Fonda was taking off in the States. I opened Scandinavia’s first “Aerobic Centre” and it took off. We called it “Sweat Shop” . One of the greatest pleasures in life is to have had a really heard training session, given your all and relax in the showers afterwards. The majority of women had never had that experience and I knew it would be a huge success and it was. At our peak we had three studios packed with people, sweating so the mirrors fogged up and you would have to mop the floors after a class.  In peak hours you would have to book weeks in advance.

I also published Denmarks first Health and Fitness Magazine called “Pulse”. I remember doing an article on a study done in a mental health hospital, which compared two groups with depression. One was treated with drugs and the other with 20 minutes cardiovascular exercise the improvement with the exercise group was staggering, unfortunately no one is making money from exercise so it does not get the promotion it deserves.

I originally trained as a PE teacher, not realising few schools had the facilities we had in Gormanston. My first teaching practice was an inner city school. Half hour bus drive to nearest playing fields on wet days there could be three classes in the gym and the only activity we could do was have a quiz, so its hardy surprising children are not exercising enough and obesity is increasingly becoming a problem in our society. So to be told May is Exercise in Medicine month is encouraging. Now we just got to get money into schools so the facilities are there for children to develop a love of physical activity.

Health advocates and public officials around the world are getting it, with growing movements on six continents. In the U.S., with alarming increases in chronic diseases and consternation over health care costs, many see the Exercise is Medicine® initiative as part of the solution.

That philosophy is the seed for Exercise is Medicine Month, observed during National Physical Fitness and Sports Month. During May, communities throughout the U.S. will hold activities that recognize that physical activity and exercise – shown to help prevent and treat more than 40 chronic diseases – should be part of everyone’s health care plan. Since 2008, Exercise is Medicine Month has been proclaimed by mayors, governors, Congress and the President. Individuals and organizations of all kinds, from youth groups to universities, churches, fitness centers, corporations and hospitals, hold events aimed at keeping people active and healthy ………………click link to read on

Rx for Health: A Daily Dose of Exercise!.