The end of the beginning 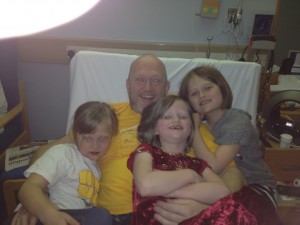 No doubt one day, we will all reach a point in our lives best described as the “beginning of the end”, many times I worried that time had arrived for me. Now I am confident of having many more years, I see the cancer part of my life as the beginning of a journey that drew to a close in May 2012 having started in March 2011

The beginning of May 2012 was one of the hardest period of my life. The chemotherapy had finished in mid-April, I had been so looking forward to this day, as I expected to start getting better from this date and I was just deteriorating. I had lost all feeling in my hands and feet, I had worked all through treatment except for 5 weeks post surgery and now because I could not feel anything, I could not practice chiropractic.

On May 3 I made an appointment with my oncologist Sheila Rau. I was not happy, as the way I felt was completely unexpected. Nobody had told me that this could be one of the side effects of chemotherapy, they had mentioned tingling in my fingers, tiredness but nothing like how I felt now, I could not even button my shirt or tie  shoelaces.

At the meeting Sheila told me it was something that happens to about 20% of patients and it could take 18 months or  years to get feeling back, sometimes it did not come back at all and there was nothing that could be done for it. She tried to encourage me by telling me how well I had done with the treatment and to be patient. I went home and looked for information on the Internet, it was terrible. Cancer people on forums had never got the feeling back, constant pain all sorts of terrible stories. For the 1st time since the colonoscopy in March 2011 I  cried. I felt very sorry for myself, I was cancer free but what about quality of life, No work, Tennis, and my willy was only good for weeing.

When Jannette came home from work she saw how upset I was and we talked about it and she asked, what would you do if you were your own patient. I thought of all the people I had helped over the years whose doctors had said you will just have to live with it. I was certain, The chiropractor in me could help me the patient. I would exercise, I knew that was the key, I had exercised all through treatment, but half way through chemotherapy I had no energy. Fatigue does not even begin to describe the feeling, its like having two bags of cement tied to your legs as you try to walk. Interestingly I recently discussed this with Emeritus Professor Edzard Ernst on his blog, he believes patients are wasting their money going to complementary (CAM) practitioners for fatigue during cancer treatment. I think he may have been trying to wind me up last week as he also announced that  Cancer patients who use CAM die sooner Last April Ernst described an elderly man with terminal cancer who decided he did not want the trauma of chemotherapy as  “victim of CAM”. If there is one thing I have learned the last couple of years is that cancer treatment is not an exact science, you do a lot of finger crossing.

After talking for a while, Janette and I went outside and walked  around the block 3 times and I felt  better for it. Some years before I had done the Carrick course in chiropractic neurology, I got in touch with a chiropractor in Ealing Johan Jeronomous and asked for an appointment to be assessed and have treatment so I could measure my improvement as I went along.

7th of May was a bank holiday and I went to the gym to do a Cooper test on a treadmill. Basically a Cooper test is a measurement of how far you can get walking or running in 12 min. I had done one just before I started treatment and right up to the point during chemo when  I no longer had any energy. I had remained between 2200 m in 2400 m during treatment, now I was down as 1420 m on this test post chemo and I weighed 101 Kilos.  I also lifted a few light weights and swam 2 lengths of the pool, I was completly exhausted and had to rest most of the next day.

Went to the chiropractor on the Tuesday he measured my sensory, motor, autonomic function and reflexes and put me on the balance machine to see how long I could hold on a static platform (about 20 seconds). On 10 May as my luck would have it I had another gout attack, which prevented me walking, I’ve been getting these every month since started chemo and the only thing that seemed to relieve the pain was to powerful anti-inflammatory Declafennec which I did not want to take but the pain was too much. I had read an article about drinking concentrated cherry juice (Cherry Active) and thought I would try it and to my amazement in 2 days it took the edge off their pain, I have been drinking it since and have-not had another attack of gout in 12 months. The public is warned this is only anecdotal evidence not science,  and no doubt the lifestyle change which began here has had an impact.

On 17 May I went into the new Victoria Hospital to have my colostomy reversed. As bad as cancer treatment was the colostomy bag was the worst part of the whole experience. It taught me how people can get used to anything no matter how horrible, so I was really looking forward to having my ass back. 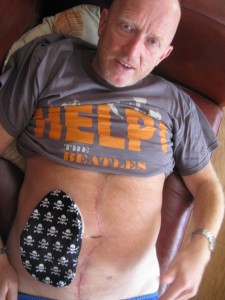 My excellent surgeon Ian Bloom performed the surgery on May the 18th 2012.  I follow the same routiene as always. I tell the anesthetist to warn me 10 seconds before I go to sleep, so that when I go out there last thought in my head are the children.

Everything went well, the kids come to see me and I just have to wait for my arsehole to start working again. I went out into the hospital Garden to exercise and there are all these benches dedicated to people who loved the garden and died in the hospital. I thought how cool it would be to have a bench dedicated to a survivor and hopefully on May 18th 2016 the New Victoria Hospital will get a New Bench when I will be five years clear.

My ass started working again at 14.00, on the Saturday and over the next 15 hours I must have gone to the toilet 60 times. My rectum is now smaller because of the surgery so can not store much poo and was extremely sensitive as it hadn’t been used for 9 months. So every teaspoon of poo that reached my rectum made me want to go and I could not tell whether it was a fart or poo, when I went to bed I was getting up every 10 min, and this went on till 5 in the morning.

Believe me anything is better than the bag and gradually over the weeks it normalizes. Although my stools are very narrow due to the surgery, spicy food can be risky, fortunately I have had no accidents which surprised the surgeon at the follow-up a few weeks later, so either i am lucky, or made many good lifestyle decisions during treatment

Every day after getting out of the hospital, I went to the Excel leisure center and walked and jogged on the treadmill and swam. When I did the next Coopers tests on the 29th of May I had improved by 200 m and although I had no feeling in my hands and feet, my balance tests where improving. For the 1st time since finishing chemotherapy there was light at the end of the tunnel.

3 Responses to The end of the beginning